WASHINGTON, DC — On July 4th, President Trump announced an ambitious plan to put a man on the Sun by 2020. At a press conference held in the Rose Garden, Trump claimed his administration has drawn up plans to send a crewed mission, led by Jared Kushner, right into the heart of the Sun, where Kushner and the others astronauts will plant an American flag that will “shine like you’ve never seen.”

The President explained the mission as part of his ongoing project to assert American supremacy on both the terrestrial and extraterrestrial stage. “For too long, the Sun has been sitting up there, laughing at America,” Trump declared. “But when our guys punch a huge American spacecraft right into its big, stupid face, it’s not going to be laughing anymore. Believe me.”

Sources within the administration report that the proposed mission has been in the works for months. Behind the scenes, not every White House official is thrilled with the plan—some, such as Secretary of Defense James Mattis, have privately cautioned that it might wind up becoming another expensive boondoggle like the administration’s abortive venture to “subdue the sea.” In addition, a few protested the president’s insistence that the spaceship not use ordinary rocket fuel because “Coal, it has to be coal.”

But most are enthusiastically in favor, including Vice President Mike Pence. “Mike stands one hundred percent behind the President on this one,” explained a source close to the Vice President. “He’s pretty sure the Sun is where God lives. And he’s hoping the astronauts will be able to ask Him a few of Mike’s big questions, like why did God make gay people and is it really okay to poop? Repeated assurances to the contrary, Mike strongly suspects it’s a sin.”

Although the administration is publicly billing the audacious initiative as a demonstration of American greatness, a dozen anonymous sources claim that private motives underlie Trump’s decision as well. According to one source who describes himself as a friend of the president, Trump has a longstanding resentment of the Sun that has been festering for some time.

“I first noticed it one time we were out golfing together,” this friend said. “The Sun seemed to be getting in his eyes a bit as he was lining up a putt. He kept trying to reposition himself, and he was doing a lot of looking up and grimacing. As this was going on, I could hear him muttering things at the Sun, like, ‘Oh, I’ll get you for this.’ The way he said it, you knew he meant it.”

The President seemed to lend credence to this assessment in a pair of tweets lashing out at the Sun: 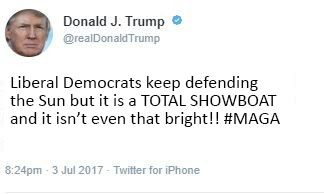 Responding to the President’s tweets, Senate Minority Leader Chuck Schumer (D-NY) claimed that Democrats weren’t trying to “defend the Sun, whatever that means,” but that they did object to spending millions of dollars just to send astronauts to a fiery death. The fiery death point is much disputed by Republicans, including Deputy Press Secretary Sarah Huckabee Sanders, who insists the Sun is not nearly as hot as scientists keep saying it is, and, anyway, “there’s only one way to find out.”

No doubt the controversy is likely to continue, and the mainstream media is getting in on the act. The New York Times is purportedly working on an in-depth investigation into what white working-class Americans think about the Sun and how warm it is. Democrats need to reach out to those voters if they’re to have any hope of retaking the House of Representatives in 2018.